It is a system that consists of one or several cameras that display multimedia content on one or multiple screens projecting an image of users in augmented environment. This helps to get them almost totally immersed into the augmented world and involve them into a product presentation, dynamic game, interactive performance, etc.

In this system two cameras are used to give the presenter more freedom in using augmented 3D visual means in the presentation. It gives the speaker the opportunity to enliven his presentation by adding interactive 2D and 3D illustrations, models and images in real time.

AR studio from EligoVision employs a system comprising several cameras of different standards calibrated in a specific way to be able to interact with each other.

This system helps to solve the problem of limited space where markers interact with one working camera. This gives the presenter more freedom on the stage during the presentation which is a big advantage for working with augmented reality markers in both the horizontal and vertical planes.

This system can be supplemented by several cameras, thus widening the possibilities of the interaction with the augmented reality markers, and can be used to transmit the signal to any kinds of displays or screens, as well as to broadcast it directly using TV networks. 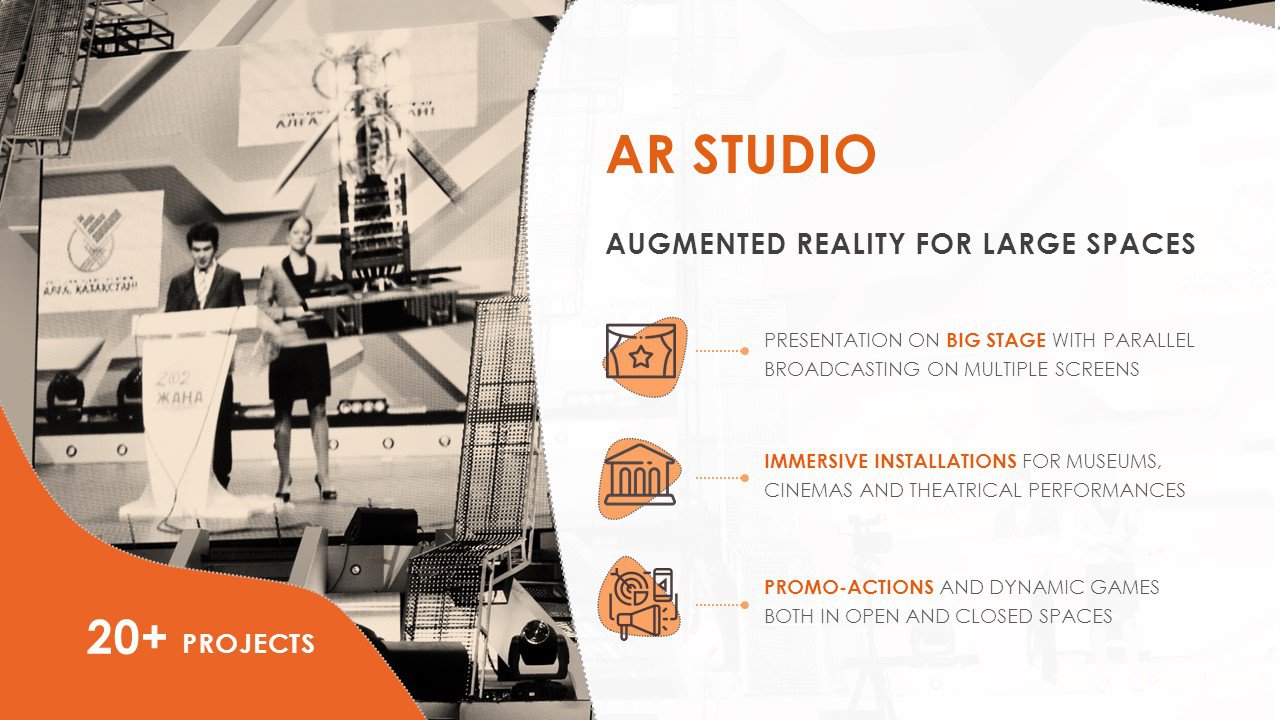 A promotion is usually timed to launch a new product and its purpose is the ultimate sale of a product or service. However, at the planning stage its main task is to attract the attention of potential consumers.

Augmented reality installation in points of sale or expo floors that involves users in interaction with a product could be a perfect marketing solution.

In such cases where lots of active users are engaged into the process of interaction a single camera and a big screen are usually used in AR studio. The camera is placed above the dicplay system to 'watch' and display users onscreen.

This installation can work in a passive mode when content is shown independently from users actions and movements and the floor marker acts as a trigger. This is how "Ice Age project" works in a Museum of Natural History of the Republic of Tatarstan in Kazan where extinct animals appear on the big screen and seem to mingle with visitors.

In the second case a user aсtively influences the content and this is widely used in gaming scenarios. This way camera reacts on the movements of a marker in user's hands making it a manipulator. Usually such aт activity is rather limited in game time so that as many people can get involved into it during the promtion as possible.The level of difficulty can also be tuned on the spot.

A game promoting the medicine "Viusid" is a good example of such a mechanics.