3D Pointer is a proprietary product of EligoVision.

It is an interactive device which helps you to navigate easily in three-dimensional virtual worlds of your presentations and interact with them.

Now that we hear “virtual reality,” first thing we think of is a head-mounted display (HMD) ot VR helmet, such as Oculus, HTC Vive, or Samsung Gear VR. However, HMD is only a part of the VR system.

For a deeper immersion in the VR environment one needs a manipulator or a control device to interact with virtual objects of the 3D scene. Besides, large scale immersive VR systems may also consist of multiple screens (like in CAVEs) and then traditional manipulators connected to HMDs become rather useless.

It's remote and wireless and it has in-built optical tracking system. It's also convenient and easy to use. Having 3D Pointer in your hands, you can move freely in virtual three-dimensional worlds and interact with them. 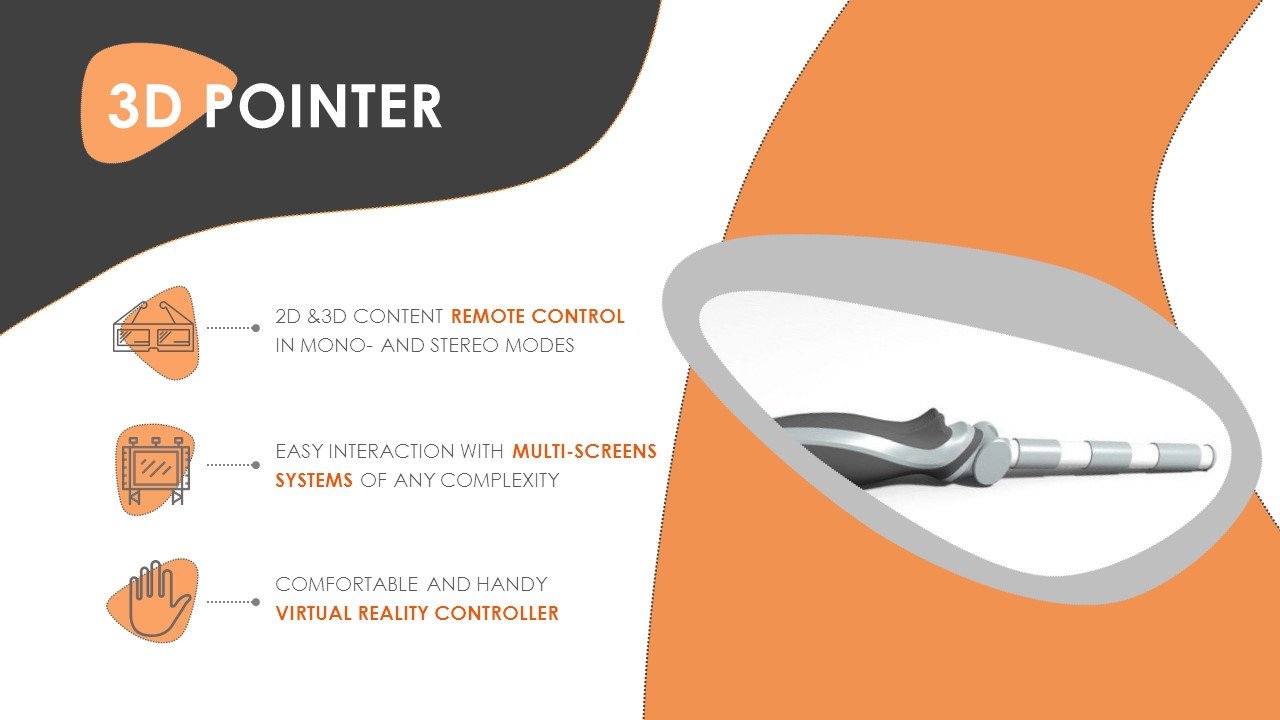 3D Pointer has five spatial degrees of freedom, and it allows to navigate and control 3D objects in the virtual world, as well as to position the cursor in a 3D space without using additional graphical interfaces. Its position in a space of a 3D computer application is interpreted against its position and orientation in a real space.

3D Pointer has a huge advantage over any 2D devices. Unlike, for example, a computer mouse or joystick (the principle of operation of which is based on moving x-y coordinates in a flat system), it has a sufficient number of spatial degrees of freedom in order to give a person full control over the 3D virtual world.

In the video below you can see how 3D Pointer is used to interact remotely with the multiscreen VR system.

Imagine that you are inside a three-dimensional virtual application with 3D Pointer in your hands.

Let's see what you can do with it:

3D Pointer gives us unlimited capabilities to control and manipulate with 3D objects. Those, who have already used this new tool, call it a "magic wand". And in some way they're right!