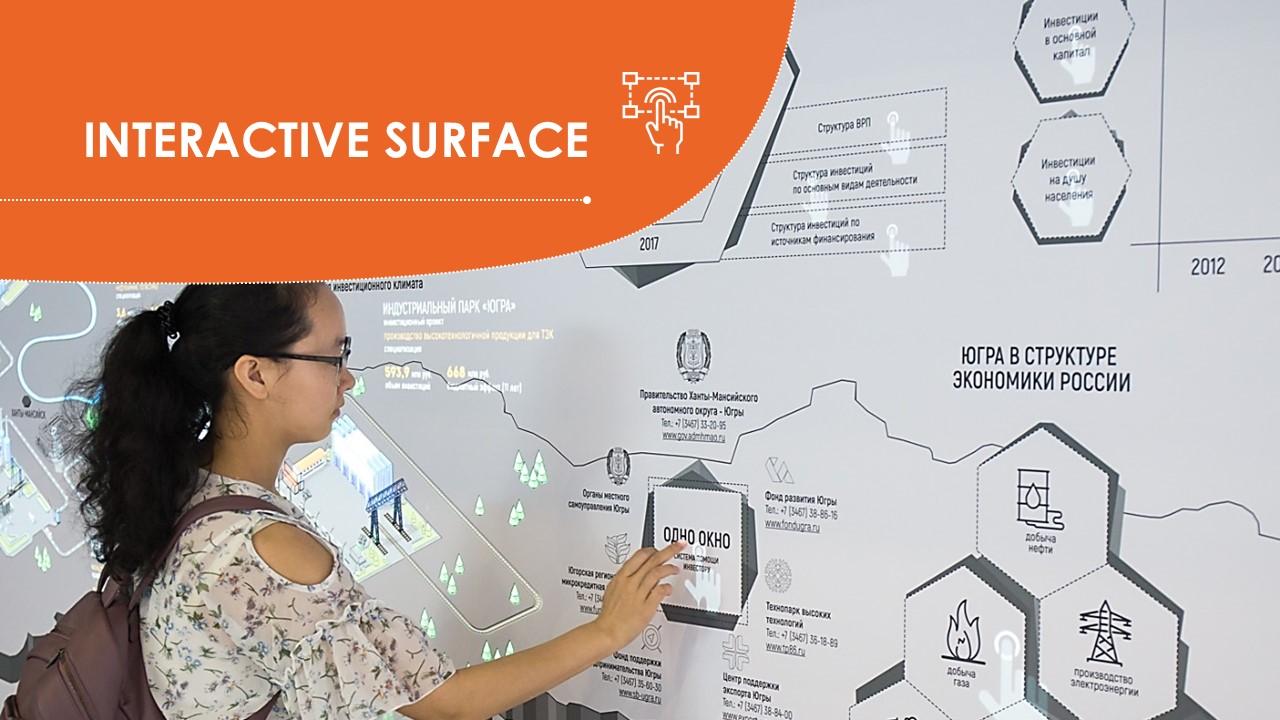 For the Russian Investment Forum in Sochi (RIF 2018), our customer – Ugra Development Fund – decided to create a budget-friendly interactive installation which would be both “attractive” and “informative” but at the same time not overloaded informationally.

Target audience: participants of RIF-2019: members of the Government and heads of constituent entities of the Russian Federation, Russian and foreign entrepreneurs and investors, representatives of investment companies, media.

Given the minimum time that was allotted for the content development we came up with an idea of the interactive surface - a static banner with a geographical map that would make all Ugra's investments project live in real time!

This technology was not widely used in the expo and event business before, since the installation itself and its technical support during the exhibition were not only capricious and technically complicated from a technical point but also rather financially “capacious”.

When new Epson interactive projectors appeared on the market it became possible to achieve the same magic effect of a static image coming alive while saving lots of costs and time. A single projector was now able to cover a zone of a bit over then 2 meters wide. For the RIF installation we have combined the interactive zones of 2 projectors, which allowed us to increase the width of the interactive surface up to 5 m as well as to provide a multi-user mode.

The challenge of this project was to design concise and effective infographic containing the key information on investment proposals as well as vast information on the investment and economic climate in the region on just one background image (the printed banner). As a result we have created 22 (!) interactive areas on one surface, which can be considered a true record!

A successful installation keeps living. During some time since the Ugra interactive map "premiere" in Sochi it was also demonstrated in Yekaterinburg, Khanty-Mansiysk and even in Harbin, China at the Russian-Chinese EXPO. A new section on the development of tourism in Ugra was added to it, together with an option to choose the preferred language: Russian, English or Chinese by a single tap on the wall.

All the content programming was realized in our AR and VR toolkit EV Toolbox.