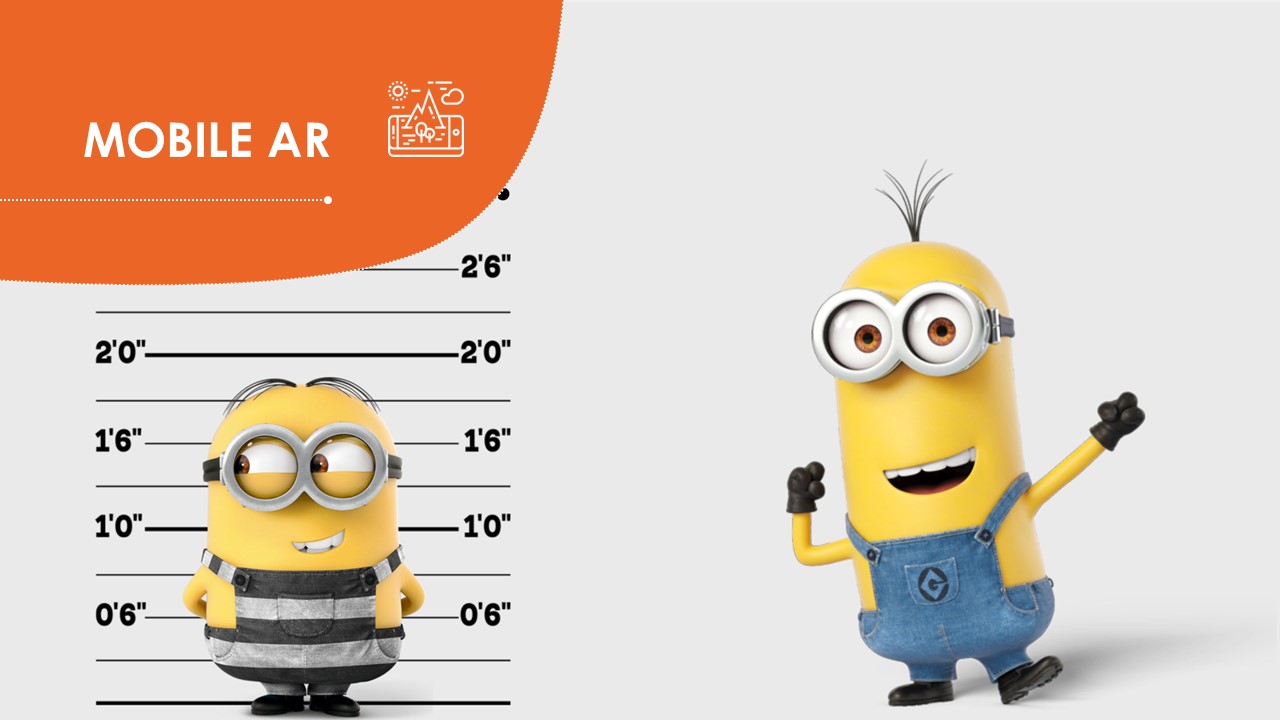 The big trend of recent years is creating branded mobile augmented reality applications for large-scale advertising and communication campaign. Some of them timely concure with animated movies premieres featuring popular cartoon characters.  This appoach has proved itself really well resulting in brand loyalty growth as well as in increased sales.

Our customer - the GP manufacturer representative in Russia launched a whole line of branded products, and the start of sales was planned together with the cartoon “Despicable Me 3” premiere on Russian cinema screens. The main task was to design and set off a mobile AR game with Minions characters from the "Despicable Me" franchise both for Android and Apple devices.

The mobile application was aimed at reaching two main goals: the first one was to stimulate the purchase of more branded GP goods and products, the second one - to convey some useful information about batteries and the GP brand itself in a playful mode.

There were some interesting cases we faced during the development of this application.

First, we had to combine two tracking technologies both markerless and marker based due to a very small size of the markers on the product packages. The second story was to convince the manufacturer to change the plastic of the package since the original material glittered a lot (which is not good for quality marker recognition).

A big surprise was the rough restriction from the Universal Studio to use 3D models of Minions characters so that we had to rewrite the game scenario using only 2D images. One more restriction that followed was the forbiddance to animate all 2D Minions and even to use 'clouds' to make them 'speak' with the users of the app. Every small detail had to be carefully coordinated with the Universal Studio.

The plot of the game went along with the plot of the cartoon when some Minions went to prison and had to escape it. The game was activated by an AR chip embedded inside the package. Each chip had its own Minion associated: Kevin, Stuart, Carl, Dave or Phil. By showing the AR chip to the camera a user could start the game mode - the Minion appeared behind the jail bars in a labyrinth. To complete the game one should have answered a number of quiz questions (we have come up with more than 80 questions about batteries and accumulators) in order to rescue his Minion. If the answer was correct, the Minion moved one step forward to freedom. If the answer was wrong he was pushed back from the exit.

As soon as AR “rescue” was successfully over, a user could take a selfie with this favourite Minion and post the photos on social networks. An icing on a cake was a unique promotional code hidden inside a package that allowed users to take part in the GP lottery.

The result of this big piece of work resulted in more than 20 thousand downloads and installations without any promotion of the application on TV and media which our customer considered as a well deserved success!